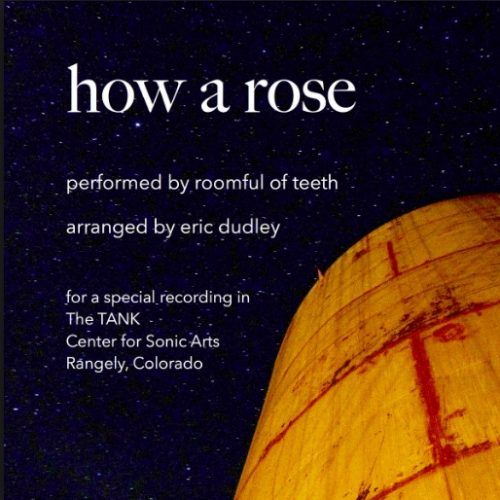 This past June, Roomful of Teeth completed four days of recording and produced a special community concert in Rangely, CO at The TANK Center for Sonic Arts. Among a dozen pieces recorded in the nearly hundred-year-old structure was Judah Adashi’s my heart comes undone. Roomful of Teeth’s summer solstice performance at The TANK is featured in a collection of Notable Performances and Recordings of 2017 published by Alex Ross in The New Yorker. The article includes a link to a special recording of Judah’s piece where intense gusts of wind and rain can be heard among the swirling and reverberant harmonies of The TANK during a sudden midsummer storm.

The idea for the project began in the summer of 2016, when Roomful of Teeth artistic director Brad Wells learned of an intriguing venue in the high desert of Colorado. The space, located in the small town of Rangely, was a 65-foot-tall, 40-foot-wide steel water tower from the age of steam engines publicly known as The TANK. The structure has long been an underground destination for experimental musicians from around the country due to it’s rich acoustics and swirling reverberations of up to 40 seconds. Over the past few years, volunteers in Colorado have been converting the monumental structure into a public performance venue and recording studio.

Roomful of Teeth is an astonishing vocal octet based in NY that works closely with lots of contemporary composers and incorporates all manner of unusual vocal techniques – overtone singing, for example, and traditional sounds from places as varied as East Asia and Appalachia.

They’ve just released a luminous new single for Christmas: an arrangement (by Teeth tenor Eric Dudley) of the Renaissance German hymn “Es Ist Ein Ros Entsprungen,” usually translated as “Lo, How A Rose E’er Blooming” but which they’ve re-titled “How A Rose.”

There are no unusual effects needed because Roomful Of Teeth recorded this song (in the heat of the summer) at the Tank Center For Sonic Arts in Colorado. The Tank was probably a water tower for a proposed rail line but is now a super-reverberant place for music and other art projects. The circular metal tower bounces sound for up to 45 seconds, meaning that when you’re singing verse #2, you might still be accompanied by your performance of verse #1.

Such a venue rewards slow, spare music-making, and that’s what Roomful Of Teeth provide. Their reward is a glowing, floating recording that will clear a space in your busy holiday.