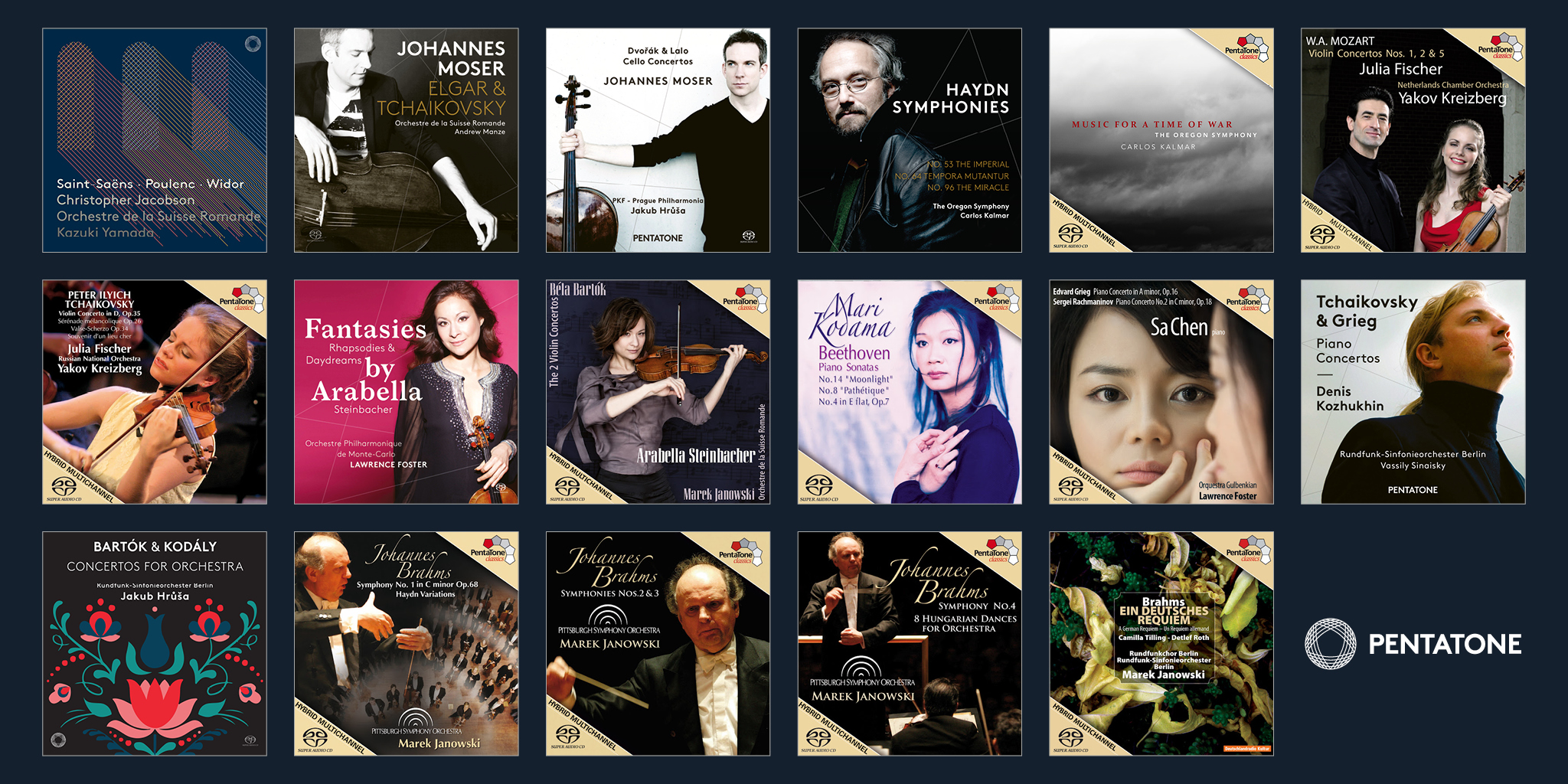 Bill Dodd has been listening to the entire Pentatone DSD catalog for many years. And extensively over the past 6 weeks for the purpose of this blog. These 17 albums below are the result of that; the tip of the iceberg, the crème de la crème, the cherry on top, the must-haves. Enjoy the read (and the discount)!

20% Off.
Coupon PentatoneDiscoveries is applied automatically in your cart.
This sale ends on May 9th, 2021.

You’ll find a lot of great labels on Native DSD, but Pentatone is one that stands out! With a lineup of great artists, great repertoire, and wonderful recording quality, it’s hard to go wrong with any of their releases. For this edition I want to highlight a few that I particularly like. This wasn’t easy because I could happily recommend five times as many! But here we go.

Organist Christoper Jacobson, is backed by Kazuki Yamada and The Orchestre de la Suisse Romande in Poulenc’s Organ Concerto, a favorite of mine since it was first recorded.  Then there’s the spectacular Saint-Saens’ Third Symphony (Organ)!   Add Widor’s Tocata from his Organ Symphony no. 5 and you have a demonstration-quality album that will show off any system.  But more importantly, it’s great music making by these forces.

Next, Johannes Moser is the soloist  as Andrew Manze conducts the Orchestre de la Suisse Romande in a powerful presentation of  Elgar’s Cello Concerto and Tchaikovsky’s Variations on a Rococo Theme.  You can’t help but be moved by these works. Johannes Moser is marvelous!

Johnannes Moser also shines in the Cello Concertos of Dvorak and Lalo.  Moser says both express a strong “yearning” that he can (and absolutely DOES) relate to.  Jakub Hrusa conducts the Prague Philharmonia.

Carlos Kalmar and the Oregon Symphony have a number of world class albums available from NativeDSD with Copland, Britten, Vaughan Williams are all performed as well as any I’ve heard.  But I was not expecting this one, and I was totally delighted: Haydn’s Symphonies nos. 53, 64, and 96!  I especially want to recommend it to people who haven’t really discovered Haydn’s magic. Superb!

For something completely different Kalmar and his Oregon band are remarkable with Vaughan Williams dramatic Symphony No. 4, and Benjamin Britten’s Symphonia da Requiem.  If you think of Vaughan Williams as a composer of softer, folkish British music, his Fourth Symphony will change your mind.  And This album will make you abandon any notion you might have that The Oregon Symphony is just an OK regional band.  Pentatone’s recording is fantastic.

Julia Fischer, backed by Yakov Kreizberg and the Netherlands Chamber Orchestra is delightful in Mozart’s Violin Concertos, Nos. 1,2, and 5.  Although these are Less recorded and perhaps underrated compared to his later concertos, Julia Fischer makes these  youthful Mozart works sparkle!

Julia Fischer has received acclaim for her performances, few more so than her recording of the Tchaikovsky Violin Concerto in D.  Yakov Kreizberg is again conducting, but with the Russian National Orchestra.  Emotion AND intellect shine through on a performance that brings new life to this romantic classic.

And then there is violinist Arabella Steinbacher!  She’s wonderful in works from Mozart to Prokofiev!  This album,  Fantasies, Rhapsodies, and Daydreams is a collection of what one might call “lollipops.”  She says there’s a reason that people used to enjoy these so much at concerts when someone like Heifetz, Kreisler, or Menuhin would play them. And I agree. Lawrence Foster conducts the Orchestre Philharmonique de Monte Carlo.

How many Moonlight Sonatas do you have? As with his symphonies, I am awash in Beethoven sonatas. But if I had to narrow my library down to a single performer, (a silly thought, of course) I could easily pick Mari Kodama! Her Beethoven shows great strength, but there is no doubt of the romantic side.  With the “Moonlight” and “Pathetique” you’ll have two of the most beloved sonatas, and perhaps a reason to seek out her other recordings.

And speaking of romantic, Sa Chen plays two of the most romantic piano concertos in the repertoire, Grieg’s Piano Concerto and Rachmaninoff’s Piano Concerto No. 2!  She is ably accompanied by Lawrence Foster and the Orquestra Gulbenkian (Lisbon).  Neither of these pieces is hard to find, and they’ve been recorded by some of the best. But this set brings a breath of fresh air with Sa Chen’s slightly different viewpoint and the benefit of the best in recorded sound; stereo or multi-channel. Sample it!

Or…   Try a different Grieg coupled with the Tchaikovsky Piano Concerto, both beautifully played by Denis Kozhukhin, backed by Vassily Sinaisky and The Rundfunk-Sinfonieorchester Berlin. I lean every so slightly toward this one, but you might let the program determine your choice.  Both are excellent.

Bartók and Kodály are beautifully served by Jakub Hrusa and the Rundfunk Symphonieorchester Berlin on this album. What we call Central Europe has contributed so much to the world in music! Conductors, composers, musicians. And did you know that even the legendary heads of the old Hollywood movie studios were all born a few miles from each other in this remarkable area? Bartók’s Concerto For Orchestra has been brilliantly served by Fritz Reiner, George Solti, Eugene Ormandy, and many others, but I’d put this recording up next to them with no hesitation at all.  If you’re looking for a modern recording with a heart-felt performance of these works, I’d recommend this one!

There are many fine symphony recordings on Pentatone, but none is more recommendable than the 3 albums with Marek Janowsky Brahms symphonies with the Pittsburgh Symphony Orchestra. The First Symphony is coupled with the Haydn Variations. The Second and Third are together in another album. The Fourth Symphony is coupled with the Hungarian Dances. And there’s the perfect addition: Janowsky conducts the Rundfunk-Simphonieorchester Berlin in a magnificent performance of the German Requiem. All in all these are everything you could want in Brahms. The performances are warm, totally committed, and the sound is world class.

The fact is you can find a lot of good stuff on Pentatone! Take some time to explore theirs and all the other albums available on Native DSD. I guarantee you will find your own hidden treasures!